If you love history and (are in) love Tom Hardy, if you are into esotericism and crime, well, this things are not Taboo anymore.

Let me state from the beginning, as if you wouldn’t noticed yet: no matter if it’s Hollywood, the Anglo-Saxon culture we are in, and especially movies, have all the actors from UK.

Just take 10 of the most recent (good) films you’ve watched lately and you’ll see than more than 70% of the actors are from the United Kingdom (including Ireland, N. Ireland, Scotland, Wales etc).

That goes for Game of Thrones (affiliate link), and basically all of what TV and cinema is today (2017).

Not to mention any music here… nope, won’t go there.

And that is because they are good. Brilliant, I might add. 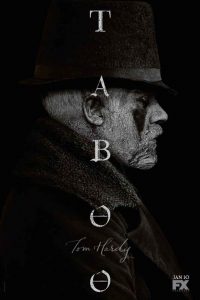 And this is what you might call a BBC (well, FX) 100% UK production starring the man of the hour as I might say, Tom Hardy.

As I did some reading about the series, more for being curios about what I’ve seen from the credits ob who is Edward Chips Hardy.

It turns out that he finally got his dad who is a scriptwriter to write a role that he played.

And apparently he put his on money on the productions (and the gossip is he lost about 2 mil $). Well, might lost some money there but considering it’s a personal project, well, sometimes you must lose something to gain something else.

Ridley Scott is on the credits too, and we will get back to him soon as a follow-up of Prometheus is about to be released this year.

So there we go, we have what I call a stop from what you are doing and sit in front of the tv/tablet/computer for 8 episodes in the first season.

Mr. Hardy is indeed a character that I follow with interest as he is what I said earlier, the man of the hour.

He is out there for some time now, naming just co-starring Leonardo DiCaprio in Inarritu’s The Revenant as he most famous Hollywood success.

Add some more great characters portrayed by him, as to mention here Mad Max, Locke – were he’s the only one on the screen, and Alfie Solomon in Peaky Blinders just to name a few of he’s works worth watching.

Did you noticed by the way that tom hardy he has three of four films starring alongside Gary Oldman?

Back to Taboo now; a TV series (mini I may say) PG almost 18+ (no nudity but bad language, at some extent not really necessary) set in the beginning of the previous two centuries (the 1800’s) in a London full of… well… like today probably.

Back from the dead as almost everyone considered him be, the son attends the father’s funeral (discrete father-son parallel) and turns upside down a world that runs his own course.

The Crown, the Company, Keziah (what a cool name) James Delaney and the fresh United States are 4 major entities in this universe.

Nope, this are not the keywords I use for this blogpost, this are the keywords that, at an impersonal level could describe what the series is all about.

I don’t like to go into details, because it’s hard not to spoil.

But I do want to stay on it for the trouble of a few words about a subject that makes the story more interesting: shamanism.

As he’s considered dead because no one heard from him for a couple of years, the main character (portrayed by mr. Hardy) didn’t returned a… christian.

It’s a domain that I’m interested and researched about and I do appreciate how it all blends, two different worlds, visions and ways of seeing what is happening.

Reminded me of Twin Peaks (which by the way it’s about to start again for the third season -after 20 years- in august).

Hope you will enjoy as much as I did.