Nae Caranfil is the most respectable Romanian movie director. So great that his works are not fully appreciated for their great value. “Too good to be true” certainly applies to his films and for this one – Closer to the moon -in particular he had a different approach.

He used international actors for his 2013 Closer to the moon, the story (based on real facts, not like “The Martian”) being about a highjacking of a bank car during the communist period here in Romania (as if you didn’t know by now, I am Romanian).

“On an official station, even Brahms becomes propaganda!“

Set up in 1959, during the peek of the Bolshevik revolution in Romania (before the dictatorship of Nicolae Ceausescu, when the Russians still had a word to say about ruling our country -as you may not know, Romania was a communist country but was never part of USSR, and Ceausescu had argued with the Russians all the time -that’s what got him killed, but this is another story), the movie is about an event that may have took place or may not: the rubbery of a bank car; the money were supposed to be used in exchange for about 10000 jews to be b(r)ought to Israel.

As the story goes, robbing a bank in full daytime was masked around a film, as everybody thought the were shooting a movie. 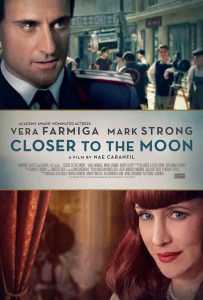 Maybe this could be a reminder for every young guerrilla fighter out there (PKK, ISIS or South America) What would happen if you really win? Are you prepared for a victory?

As our story goes, after they won and they all had office jobs in the new communist administration, they started to get bored (something like Che Guevara), and that brought them to “needing a challenge”.

Because, as our story goes, after they won and all had office jobs in the new communist administration, they started to get bored. Something like Che Guevara. So, they needed a new challenge.

With a remarkable distribution (Mark Strong, Vera Farmiga), it manages to capture the feelings from that period.

First of all, you need to know what was it like in order to recognize it. It has all the ingredients of that time: fake trials, low educated nomenclature and, of course, political exterminations.

And second of all, as I  remember reading somewhere in an interview with the director, the final cut wasn’t his, it was the studio’s cut. So, as I imagined the movie went, it is a masterpiece.

But you do need your imagination. If your not a patient person, you will quickly loose interest.