M. Night Shyamalan made a comeback, and this time is for the long run. Split is one of the best pictures out there, one that, even in our time, I’m thinking of having it on DVD/Blue ray.

Ok, I said it before, I think for every movie director, that this one is my favorite one. The truth is I don’t really have one. Like in music, I cannot say I love a specific genre more than the other.

I am a Hip Hop DJ, I’ve toured most of my home-country for the past 10 years for more than 250 live shows, I’ve managed a recording studio and a record label releasing Hip Hop music.

But if you look at my playlist (in my phone, Youtube, iTunes or Spotify) I’m not sure you could make an idea (probably my youtube suggestions bot has crashed sometime ago) about what I am into. It gets so diverse I don’t even know what I’m into.

From Hip Hop or Black Metal, world music to most traditional and exotic music from the deepest places on earth that not even Google Maps could map it 🙂

Back to movie directors now, Manjo (in case you didn’t know from where the M. came from) Night Shyamalan made a comeback (how many comebacks does he need?) with this trilling (Sixth Sense like) masterpiece.

Last couple of movies weren’t that convincing. Even for me – who’s a fan no matter what – although After Earth was the last movie I’ve seen with my dad at Cinema.

The first movie I saw at cinema was with dad and when I was a kid it was a routine that each week we will go see one.

If you’re not familiar with M. Night Shyamalan’s work and who he is (or was, he appears on an episode of Entourage as the man to be) then see Matthew Perry’s adventure about him.

Funny thing, and I know this is happening because I once was in the same situation as he was about a person.

Back to Split, it does challenge your mind a little bit more. The thing about Shyamalan’s movies is that he creates from the beginning a fantastic atmosphere with you included in it; the sacred and the profane (similar to Twin Peaks, which by the way, has a new season coming out this summer).

The light and the dark. The good and the evil. The past and the present.

We saw that in Signs, when the lost of the fate managed to make them survive. And also a trauma (syndrome, obsession – the little girl with the water) is the way to win.

He always challenged us and the world we live in with special people, different from what we call by convention normal.

And always the past is the one that makes us make it into the future. What we learned when we were kids (like hunting) is why we survived today. By asking the right questions. I guess it’s called life.

We see throughout his movies that there are elements (I guess it’s fair to call them obsessions) like the past, family, faith, falling leafs, numbers, nature, water. And obsessions are a BIG thing. Maybe more that we, again conventional, would like to think they are.

And all his frameworks are static (except for 5% of them which are hand filmed) but he discrete uses the zoom function to point out the -until then not so- obvious. Then he adds noises and sounds, to create the atmosphere or to amplify it. A little similar to what Chris Nolan did in Interstellar. Ok, these two weren’t the first ones to use this technique, obviously. But they took it to a certain level that we referred to now.

Oh, and why did he chose a train for the final transformation?

He needed a sacred place. Unbreakable anyone?

It’s like his movies are abundant in OCD’s. Maybe he had too many characters in mind and so little time to develop all of them so he decided to incorporate them all into one. It turned out great this time (it does mention Kanye West and every movie that has some Kanye West in it must bee cool).

Actually (this is a later edit) after reading some of the interviews, he developed the main character (which one?) for Unbreakable. For whatever reason, not important right now, he decided back then to put him on a side for a better time.

I’ve been studying the human mind and what is capable of for some time now. There are people out there with extraordinary capacities. What we thought in the past was paranormal in the best cases, now science plus the technology and the information that we all have access to changed things.

Only the broken are evolved

Trauma is what makes us stronger. Its like the skin who, trough its nerves communicates to the brain that there is a problem somewhere: pain. If your muscle doesn’t hurt, they won’t grow. And, if you didn’t suffer you cannot evolve. But one thing is certain, there’s a beast in everyone.

The movie has been well documented. It’s true that there are people who develop several personalities and throughout the process the chemistry of the body changes. One personality could suffer of diabetes and do insulin shots, and the other(s) don’t.

My first thought when seen the trailer was about Identity, another ’90 (2003 actually) thriller that is on the same subject. I think a honorable mention should go to it. It was over it’s time then, although in nowadays, I’m not sure we would have the same patience for it.

I’m trying so much not to spoil. So happy that I’ve watched the movie before reading all the reviews available on line. Even in the interviews given by the director.

Shout out to the cast. James McAvoy just entered hall of fame (for those of us who didn’t had it in there).

Really nice to see Betty Buckley again. For the Oz fans out there, she was Suzanne Fitzgerald (my plan is to write a book about Oz in this lifetime).

And all the other cast (as you imagine or know by now, all the personalities are played by the same actor) weren’t new to the dark genre.

The documentary was supposedly about the past of Shyamalan and that he made some sort of a pact with the supernatural (the devil) – this being the reason of his success.

Johnny Deep and Adrien Brody appears on the documentary directed by a documentary maker so everything seems legit.

And if you watch it you will really feel the trills on your back. Like I said, I won’t spoil it. Maybe the fact that he was born in India adds a special magic thing to it.

When you watch interviews with him he seems such a nice guy and the tone of his voice does not put a face and a voice to the director that could have made those films.

He sounds so nice that you really think that if you will met him you could have a chance starring in his next movie.

But some people say that this documentary was the reason why some of his last movies were the way they were.

When a room doesn’t have windows you draw one on a piece of paper and stick in on the wall.

And when the world needs a Shyamalan at his best movie, he needs to go back and search for something to give to us.

Writing the new film every single day. Even went looking at locations to inspire me yesterday.

Apparently, he’s busy working on his next project. Can you guess what is about? 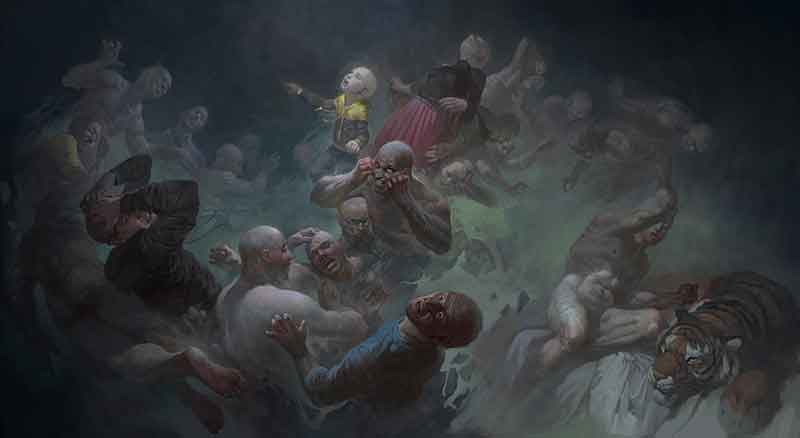 On his twitter account, M.Night Shyamalan held a fan art contest about this movie and what inspired talented people to draw.

This is the winner and it’s truly a masterpiece that expresses as it’s best what the movies do.

Later edit: I can’t believe it’s been 5 years already since I’ve written about another movie from him, Wide Awake.